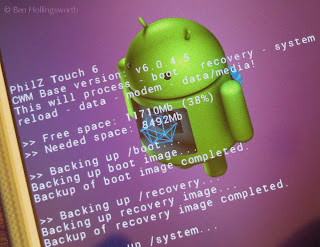 I rooted my Samsung Galaxy Note 2 as soon as I got it.  I survived the over-the-air (OTA) update from 4.1.1 to 4.1.2 easily enough, as outlined in an earlier post.  When the 4.3 update came out, I blindly assumed that it could be applied with equal ease.  Not so, unfortunately.  If I'd done my research before hand, I probably wouldn't have applied it at all.  In order to fix the mess, I had to do a fresh install of a custom ROM.  All the gory details follow.

The update seemed to go smoothly at first.  After the initial reboot, the ClockWork Mod recovery that I ran prompted me for two things:  "ROM may flash stock recovery on boot.  Fix?" and, "Root access possibly lost.  Fix?"  Both times, I instructed it to try to fix the problem, but that probably didn't matter.  When the update was finished, I found that I'd lost root access, which wasn't unexpected.  There are apps that help you keep root access after an update, but they're known to not work with 4.3 thanks to Samsung's new KNOX security setup introduced with 4.3.  I also found that I'd lost WiFi support in my phone, which I did not expect because I didn't do my research.  As it turns out, broken WiFi is actually a common problem.

Among other things, KNOX creates a "warranty void" bit in the firmware that gets set as soon as you install a new ROM or custom recovery.  Unlike the install counter that already existed, this flag can't be reset by any known means.  Once you trigger it, your warranty is over.  Anybody else starting to really hate Samsung right about now?  I guess the takeaway from this is that you shouldn't do anything goofy with your phone until after you've owned it for a month or two and are confident that you don't have a lemon that may need warranty service.

I finally got around to doing the research I should have done earlier, and found that there are solutions to these problems, but they are labor intensive.  Developers on the xda-developers.com forums (lorjay, specifically) hacked the 4.3 release when it first appeared and made available "custom ROMs" that were basically just the original factory ROM, minus KNOX, plus root access.  They fixed the broken WiFi, too.

The most newbie-friendly explanation of the process that I could find came from this post on the xda-developers forum.  Just in case it goes away, I'll reiterate it here, with my own comments. 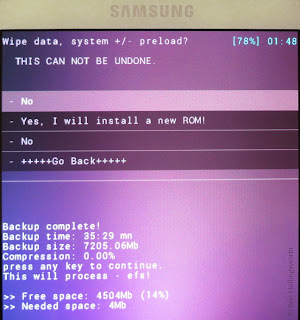 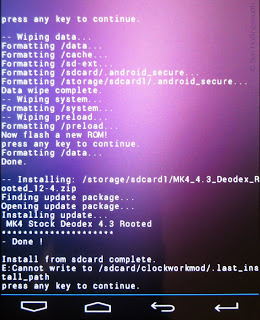 I believe, though I could be wrong, that if I wanted to forego root access and just get my WiFi working on a non-rooted phone, I could have just flashed the WiFi patch using Odin and called it good.  No need to backup, wipe, or install the custom ROM.  That would have been considerably simpler... but it would have left me unrooted.  I've grown rather fond of root access, if for no other reason than it allows me to get good backups of my device.

Upon setup, Google tried to reinstall all of the apps that I previously had on my phone.  Many of them came through OK, but some failed with, "App could not be downloaded due to an error (920)."  The solution is to clear the cache & data for the Google Play app, then reboot.  The failed apps should come in OK after that.

Unfortunately, it seems that my phone reboots spontaneously from time to time with the new ROM.  This happened when I was trying to restore my app backup, so many of the apps didn't get restored properly, and had to be restored piecemeal as I discovered them.  I think I've finally got all those done now, but it took far longer than it should have.

I've also seen that my phone occasionally reports that my WiFi connection is unstable.  It doesn't do it very often, and I haven't noticed any ill effects like terminated connections.  I may have to look into that one further.  I though that the WiFi patch mentioned above was supposed to correct that problem.

If you include all the research that I did along with the time it took to reconfigure all my apps that didn't get restored initially, this whole process took me about four evenings.  To add insult to injury, I haven't noticed any improvements resulting from the 4.3 upgrade.  I certainly wouldn't recommend doing this upgrade unless you're really bored or curious.  I will definitely not be installing it on my wife's rooted Galaxy S3.

Have you installed the 4.3 update on your Samsung phone?  How did that work out for you?  Please share your experience in the comments below.
Posted by Obi-Wan at 8:00 PM