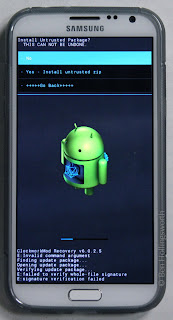 My Samsung Galaxy Note II phablet uses the stock ROM, but is rooted.  On 25 April 2013, Sprint pushed out an over-the-air (OTA) update to fix some minor problems.  Android is very persistent about asking you whether to install OTA updates, so I eventually gave in and installed it.  Because my phone was rooted, I ClockworkMod Recovery presented me with several questions on how to proceed.  Here's what I did...


This is a minor bug fix update, not the 4.2 update that is rumored to be coming soon.  Some people have been concerned that this update might cause them to lose root access, which is not the case.  Two threads were helpful in directing my course of action.  One was on AndroidCentral, and the other on XDA-Developers.

After I agreed to download the firmware, the phone rebooted.  Upon reboot, CWM  asked whether to "Install Untrusted Package?  THIS CAN NOT(sic) BE UNDONE."  It's referring to the new update from Samsung.  I chose "Yes - Install untrusted zip" to actually install the update I just downloaded.

The Note 2 cranked away for a few minutes while installing the new files, then prompted me to reboot the system now, which I did.

The GN2 then warned me, "ROM may flash stock recovery on boot.  Fix?"  Selecting "yes" will retain the ClockworkMod Recovery ROM, which is what you probably want to do if you want to retain root access.  I chose "Yes - Disable recovery flash."

The phone then warned me, "Root access possibly lost.  Fix?"  Since I definitely do want to retain root access after the OTA update, I again chose "Yes - Fix root."

The only ill effect I've seen is that one of my widgets (Jorte) is now narrower and uses a smaller font than it used to.  Jorte has traditionally been problematic, though, so I'm hesitant to blame this on the Samsung update.

Eight months later, I had significantly more trouble installing the 4.3 OTA update on this same phone.  Read more about that in this post.
Posted by Obi-Wan at 10:42 PM