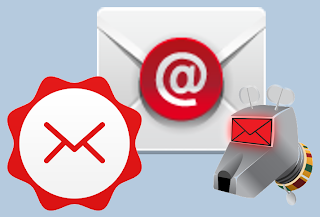 I recently decided to explore some options for different email clients on my Android 4.3 smart phone.  I've got three different email accounts that I access regularly from my phone.  Two are GMail accounts, but one is a traditional IMAP account at work.  After a little online research, I limited my choices to three options:  Samsung's stock Android 4.3 email app, K-9, and SolMail.  The short story is that after playing with them simultaneously for a few days, I settled back in with the stock app.  The long story follows.

I've been using the stock email app on my Samsung Galaxy Note II (running Android 4.1.2) up until I upgraded to 4.3 last week.  It worked well enough, but there were a few idiosyncrasies that annoyed me.  When my wife got her new Samsung Galaxy S3 (running 4.1), she complained loudly about how much she missed the stock email app on her old HTC Evo 4G.  Taken together, I figured it was time to survey the options.

All three apps allow me to merge together the inboxes of my three accounts into a single, unified view.  My old 4.1 mail app required me to inspect each account separately, so this is a welcome feature. 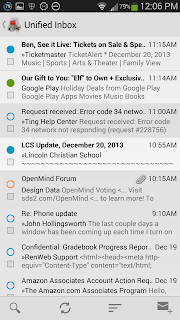 K-9 seems to be a popular mail app.  Many of my co-workers use it.  I'd experimented with it a year or more ago on a different phone, but soon ditched it for reasons that I no longer remember.  When I tried it again, my experience was a little better, but still not great.  K-9 was the first app to get crossed off my list.

Aesthetically, K-9 isn't too bad.  It's got clean lines and generally looks nice.  Like the GMail app, K-9 puts a small profile picture of the sender next to each message in the list.  That's probably nice if most of the senders are (A) in your contact list and (B) have profile pictures attached to their contact.  For me, that's rarely the case, so I found the list of messages to be cluttered with generic icons.  Even on my Note 2's giant screen, real estate comes at too high a premium to waste with useless avatars.  I eventually found that this is an option you can turn off.  With the avatars removed, K-9 is the most space-efficient app of the three that I tested.  That's a good thing.

When viewing plain-text messages, K-9 picks a "reasonable" font size, and wraps lines to fit the message on the screen.  However, it provides no option to pinch zoom the message to a smaller font so that the lines don't wrap.  I receive several automated status report logs every morning, and they are much harder to digest when the lines are wrapped.  This is one of the biggest strikes against K-9 for me.  HTML messages, on the other hand, can be zoomed out to show the entire width of the message on the screen.

When viewing a message, K-9 does not allow you to swipe sideways to view the next message in the list.  The other two apps allow this.  However, when you delete a message while viewing it, K-9 automatically displays the next message rather than returning you to the inbox list like the other apps do by default.  This is annoying if you want to quickly check & delete a few messages without downloading & marking as read every message in your inbox.

K-9 allows only plain-text signatures to be created.  The stock email app allows HTML signatures so you can use different font sizes, typefaces, etc.

Unlike the other two readers, K-9 allows you to forward or reply to message in your Trash folder normally, just like you can with messages in your Inbox.

Finally, I found that the settings in K-9 are broken up into too many different locations, making it hard to find the setting that you're looking for.  The configurability is great, but I shouldn't have to hunt that hard.  Of all its problems, I found the scattered settings to be the biggest downfall. 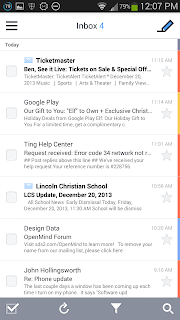 SolMail prides itself on its award-winning aesthetics.  Like K-9 (only moreso), it has very clean lines and makes good (borderline excessive) use of whitespace.  Of the three, it has my favorite look & feel.  The user interface is almost completely monochrome, except for the colored account indicator bars used in the unified inbox view to show which of my three accounts each message lives in.  Because of the enormous amounts of whitespace used, SolMail is the least space-efficient of the three apps I tested.

Like K-9, SolMail imposes its own line width when displaying plain-text messages.  You can pinch-zoom to make the text smaller, but it doesn't reflow the text; the artificial line breaks are still maintained.  This still makes it hard to visually parse the log messages that I receive every morning.  HTML messages can be zoomed out properly, of course.

Unlike K-9, SolMail has a unified view for its settings.  Every "settings" option in the GUI takes you to the same settings screen, which is wonderful.  From that single main preferences screen, you'll find the global settings as well as the individual settings for each account.

Again, SolMail allows only plain-text signatures to be used.  This isn't the end of the world, but after experiencing rich text sigs in the stock mail app, it's hard to go back.

One annoying thing that I run into now and then is that once a message has been moved to your Trash folder, you can no longer forward or reply to it.  However, you can move it back to your Inbox, from which point you can operate on it like any other message.

One curious feature with SolMail is that if you try to mail something to yourself, you cannot also address the message to somebody else.  I frequently forward an email to somebody and copy the message to one of my other email addresses for reference, but that can't be done in SolMail.  Why on earth would they impose that restriction?  I've been using email for 25 years, and I've never seen a mail program with that restriction.

The final nail in the coffin for SolMail was that it seems to initiate connections to my mail servers too frequently, and it fails noisily far too frequently.  When I was auditioning these three email apps, I ran them all simultaneously with identical 15-minute check-in interval.  I also ran Thunderbird on my desktop computer with that same checking interval.  During that time, I got lots of notifications from SolMail that it failed to connect to one or more of my mail servers.  To make matters worse, it used the same notification sound that it used for new messages.  It also gives me a notification (and noise) for every email that I send, which I found completely unnecessary.  I never got these problems with any of my other mail apps, and it didn't take long for them to get really annoying.

If SolMail could clear up just a couple relatively simple problems mentioned above, I'd probably switch to it as my preferred mail program.  Until then, it's getting uninstalled.

The email app that came installed on my phone is presumably created by Samsung rather than being a stock Android 4.3 app, but I haven't verified that.  Email apps are one of those things that the vendors like to customize.

The stock app isn't nearly as pretty to look at as K-9 or SolMail.  Samsung likes their blue TouchWiz theme, and those blue hues are carried over into their email app.  Even on the mail inbox view, there are three different shades of blue and four different shades of grey/black used.  Compared to the other two apps, that's far too busy.  The other apps use a fairly consistent white or light gray background for all messages, and use the font weight (bold vs normal) to differentiate between read and unread messages.  The stock app uses a consistent font, but different background colors.

As I mentioned above, the stock app allows the creation of rich text email signatures, allowing me to use different font sizes, weights, etc in my email signature.  It's a nice perk.


The stock app still creates its own line breaks in my plain-text log messages, but at least it does so with longer lines, so not as many of the lines are broken.  It's less than ideal, but better than the other two apps.  For HTML messages, there's a global option that automatically displays the message zoomed to fit the width of my screen, which is a nice touch.

When viewing one email message, the stock app, like SolMail, allows me to swipe left and right to move to adjacent messages in my list.  When I delete a message, it returns me to the inbox list.  This is nice for people on limited data plans who don't want to download images or large messages without approval.

Like SolMail, the stock app has a single settings screen that allows access to all of the options for the entire program and all accounts.  Well done.

Also like SolMail, you can't forward or reply to a message that's in your Trash folder.  You can, however, move it back to your Inbox, from which point you can do what you like with it.  Why impose such a restriction in the first place?

In summary, despite the somewhat gaudy appearance of the stock Samsung email app on my Galaxy Note II running Android 4.3, I think it's the most functional of the three apps, and will therefore be my email app of choice for the foreseeable future.  Still, if you're looking around for options, I think you'd be pretty happy with any of the three discussed here.

What's your favorite email app, and why?  I'd love to hear your opinions in the comments below.
Posted by Obi-Wan at 8:00 PM