Settling in with a new Samsung Galaxy Note II 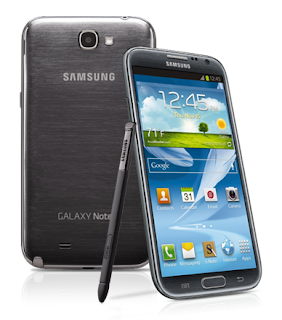 As mentioned in an earlier post, after my Motorola Photon 4G started flaking out on me, I upgraded my phone to a new Samsung Galaxy Note II.  They call this thing a "phablet" because, with a 5.5" screen, it's a cross between a phone and a tablet.  In fact, the size is exactly half way between my old Photon and my son's Nexus 7.  In the process, I upgraded from Android 2.3.5 (Gingerbread) to 4.1.2 (Jelly Bean).  After a few weeks with the new phone, here are my thoughts on it.  This post may seem a bit incoherent, so try to take each paragraph as an individual point.

The first thing I did was root the phone with the ClockworkMod Recovery using these instructions.  Although it voids your warranty, rooting the phone allows you special access to do things like doing comprehensive backups and providing free WiFi hot spots.  If you're handy and want to fully utilize the hardware, it's worth the effort.

I love the size.  I have somewhat larger than average hands and long fingers, so it's still (barely) usable with one hand.  It also slips into my front jeans pocket quite easily.  Just about every app is more enjoyable to use with the larger display, since I no longer feel like I'm peering at the Internet through a keyhole.

The smooth finish looks nice, but it handles like a wet bar of soap.  I'm constantly afraid that it'll squirt out of my hand onto a concrete floor.  Getting a case with a little more texture is absolutely mandatory.  My choice will merit its own post soon.

The built-in S-Pen stylus is nice with Samsung's S-Note app for sketching.  It's even better with Autodesk's SketchBook app.  The kids like to kill time with it.  The fine tip with its 1024 pressure-sensing levels is great.  I'm still trying to get the hang of all the apps that use the S-Pen, but haven't spent much time on it.  I do wish the S-Pen worked on the "back" button, which is outside the normal display.  In fact, we tried using the S-Pen on my son's smartphone, and it doesn't even register.  It appears to use a completely different technology that's incompatible with a standard capacitive touchscreen. 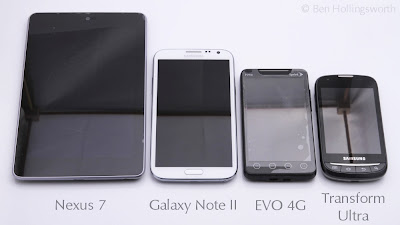 The big display on the Galaxy Note 2 sucks battery like crazy when it's on full brightness and being used, but if the display is turned off with the phone idle, the battery lasts a surprisingly long time.  The advantage of a huge display is that there's room for a huge battery.  I think the JuiceDefender app helps this, too.  After a full day of very little use, I still have 50% battery capacity remaining.

The default display mode is grossly over-saturated.  It made my inner photographer puke.  You can fix this in Settings / Display / Screen mode by choosing the Movie setting.  It will look pale by comparison at first, but give it a few minutes, and it'll start looking much more accurate.

One of the most significant improvements for me was the camera upgrade.  The new Samsung camera is a dramatic improvement over the piece of junk in my old Motorola Photon 4G.  It's faster to focus, has better color balance, and exposes properly in low light situations.

I don't care for the position of the power/wake button on the side of the unit.  I find that I'm constantly hitting it when I pick the phone up or holding it in landscape mode, which locks the screen when I'm in the middle of something.  The new case I got helps alleviate this problem somewhat.  Honestly, this and the slippery finish are the only things I don't like about the hardware.  It's otherwise excellent.

My biggest complaints are all directed at the operating system, not the device itself.  Jumping from Android 2.3.5 (Gingerbread) directly to 4.1.2 (Jelly Bean) introduced a boatload of changes, so I couldn't simply extract the backup I'd made from the old phone.  I had to re-setup all of my apps by hand while learning JB's new way of doing nearly everything.

The biggest hurdle I've encountered is how to backup the device to my Linux box.  In 2.3, I just mounted the sdcard as a USB mass storage device and then used rsync to quickly copy over the changes.  With 4.1, USB Mass Storage (UMS) has been dropped in favor of MTP.  MTP drivers exist for Windows and MacOS, but not Linux.  None of the writeups I read worked for me.  I eventually resorted to running an SSH server on the phone and connecting to it over WiFi to transfer files.  This works for copying files, but it's slow compared to USB, and it doesn't play nice with rsync.  The biggest problem with copying files to the phone is that Android no longer allows apps to set the timestamp on files, so all of images I copied to the phone from my backup were set to today's date.  Most image galleries sort by date, so this kinda sucks.

For copying files and backing up the phone, I use Rsync Backup for Android.  I sync the phone to a backup directory on my desktop computer, then copy the files I want from there.  The time stamps created by the phone are retained during this rsync; it just doesn't go the other direction.  The nice thing about this is that I can backup & restore files without plugging in my phone, or even without going home.

Another change from 2.3 to 4.1 is that the /sdcard directory on the device's filesystem is now mapped to internal storage.  If you add an additional micro-SD card (as I did -- 32GB), there's really no way to move an app's data to it like you could do in Gingerbread.  However, you can store media on that card.  Since the vast majority of my storage is comprised of ebooks, photos and backups, I just moved those three directories from /storage/sdcard0 to /storage/extSdCard and called it good.

Speaking of external cards, my Sandisk 32GB class 10 micro-sd card managed to pop itself loose from the port after a few days of use.  I don't recall any abnormal impacts, but I suddenly got a notification that the card had been ejected, and all of my media disappeared.  Upon removing my case and popping the back cover, I found that the card had indeed been ejected from the slot.  I clicked it back into place and used a small tab of gaffer tape to secure it there, so it shouldn't happen again.

Setting up a WiFi hotspot on my phone was a pain because nobody seemed to know the right settings to use.  I ended up using the WiFi Tether app with TrevE's mod, and used the following settings.  The settings not mentioned shouldn't make any difference, and can be set to taste.

The first Galaxy Note II that I got worked fine at first, but after about a week, kept freezing up and rebooting on me.  I replaced it under warranty with a new Note 2, and it's worked flawlessly.  When returning a rooted Samsung phone for warranty work, you not only need to unroot it, but you also need to reset the firmware counter back to zero.  Remember what I said above about rooting the phone voiding your warranty?  You need to cover your tracks.

Have you tried out the new "phablet" class of devices?  What's your opinion?  Let us know in the comments below.
Posted by Obi-Wan at 8:00 PM