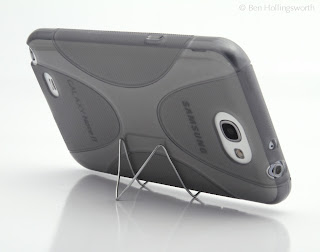 My previous smartphone (a Motorola Photon 4G) had a built-in kickstand that would enable me to stand it up on edge while watching a video or listening to music.  My current phone (a Samsung Galaxy Note II) lacks this feature, and I kind of miss it.  I started looking for aftermarket cases that had a kickstand built in, but they all were either poorly made or had other fatal flaws.  I eventually gave up that search and instead made my own kickstand from a jumbo paper clip.  Here's how.

Most of the time that I used the kickstand on my Photon, it was while listening to music, which primarily plays out the rear speaker.  Why not lay the phone face down for that, you ask?  Because I found that the sound projects into the room far better if I set the phone upright on a desk or table and bounce the sound off the corner of a wall a few inches away.  Besides, standing the phone upright also allows me to see the screen from across the room, which is handy when I'm curious what Pandora has chosen to play for me. 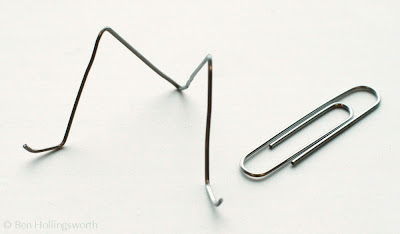 Bending the DIY phone stand from a jumbo paper clip isn't rocket science.  I started with a paper clip that was 1-7/8" (47mm) long.  Once I straightened it out, I had about 6.25" (160mm) of wire to work with.  I used a pair of pliers (my Leatherman) to get it really straight. 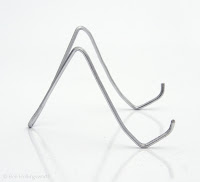 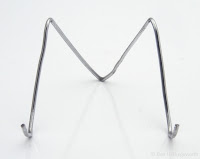 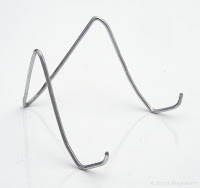 Bend the wire exactly in half so that both legs will be of equal length. 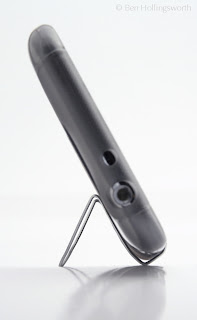 Bend a nice J-hook into the ends that's just barely big enough to wrap around the edge of your phone (and case, if so equipped).  Don't waste any wire by wrapping too far round the front of the phone.  It's important to bend both legs identically.

Bend the remaining straight lengths in half to create the support leg.

Finally, spread out the two legs about 1.5" (40mm) apart so as to provide some support for the phone.

I've found that this works really well for supporting the phone in landscape (horizontal) orientation, but the supports simply aren't tall enough to support most large smartphones in portrait (vertical) orientation.  Perhaps this wouldn't be a problem if you bent more of a hook in the front, then bent the leg so that the phone stood up straighter.  Then again, how often do you really need to leave the phone unattended in portrait mode?  It's not like you want to be tapping on the screen while it's sitting on this stand.  I can honestly say that I've never wanted to use it like that. 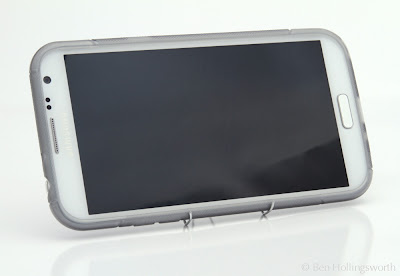 What's your favorite phone stand or dock?  I'd love to hear options in the comments below.
Posted by Obi-Wan at 8:00 PM