Fixing a crackling speaker on a Nexus 7 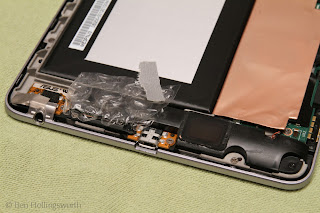 My son bought a Nexus 7 tablet shortly after they came out in July 2012.  By November, we started noticing that the external speakers (but not the headphones) were putting out lots of crackly static, especially at higher volumes (above 50%).  This is a chronic problem with the Nexus 7, and one that Asus will fix under warranty if you catch it soon enough.  However, if you don't want to live without your tablet for a few weeks during the warranty repair, there are some things you can do to address the problem yourself. 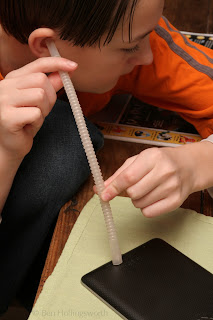 It seems that the left speaker (as viewed with the tablet face down and the speakers closest to you) is typically the one that dies.  If you've had the right one die, please let me know.

If you squeeze the tablet very tightly between two fingers right at the bad speaker, the distortion should disappear (along with a fair amount of the volume).

The proper way to solve this problem is to replace the speaker assembly.  Asus will do this for free under warranty, but it'll take a few weeks, and you risk losing all of your data if they replace or wipe the entire device instead of just replacing the speaker.  Rooting the device voids the warranty, so you'll have to un-root it before you send it in.  If you don't want to wait, you can do it yourself quite easily in just a few minutes if you can find a source for replacement speaker assemblies.  The only one I could find cost $30 + S&H and was out of stock.

If you're both impatient and cheap, you can mask the problem for free.  While researching this problem, I found a YouTube video of a guy who "fixed" this problem by pinching some bubble wrap inside the back case right on top of the speaker.


The theory behind this is that by squeezing the speaker cone directly, it can't vibrate and make that infernal noise.  Of course, it also can't produce nearly as much volume as it should.  There's always a trade-off.

Disassembling the Nexus 7 is really very straightforward.  You can remove the rear cover using only your thumbnail or a small, flat screwdriver, and that's as far as you need to go in order to install some bubble wrap.  If you want to actually replace the speaker assembly, you'll also need a very small Phillips screwdriver.  Of course, this technically voids your warranty, but as long as you're careful, Asus will never know you've been in there.  Instructions on removing the speaker can be found at iFixIt and this YouTube video.


I installed a piece of bubble wrap over just the one defective speaker, positioning it such that one of the bubbles was centered over the speaker.  I didn't want to cover up the working speaker, because squishing the speaker like this significantly lowers the volume.  I held the bubble wrap in place with a small strip of gaffer tape.  I've heard of people using a 1/4" (7mm) square of mattress pad instead of bubble wrap, but I would think that would reduce the volume even further.


After popping the rear case back on, there was a barely noticeable bump where the bubble wrap was.  My 13-year-old son didn't even notice it, and it didn't cause any problems with the protective case he uses, so I don't think it's an issue. 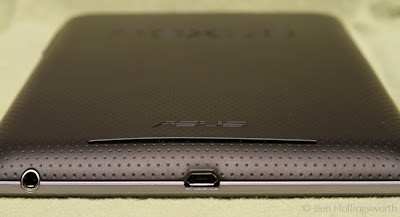 After turning up the volume all the way and employing our drinking straw stethoscope  I could tell that the working, uncovered speaker was easily twice as loud as the speaker with the bubble wrap.  However, the annoying static was now virtually gone.  With one good speaker and one quiet speaker, we figured the volume was still loud enough for my son's purposes.  If both your speakers must be covered up, your mileage may vary.  Headphones or portable, amplified speakers may be in order.

The best part about this bubble wrap solution is that it's completely reversible.  If the other speaker--or anything else--eventually dies and we need to send the tablet in for warranty work during the next six months, it will be trivial to remove the bubble wrap without leaving any footprints.

Update:  A couple weeks after this mod, my son removed the bubble wrap because the volume was unacceptably low.  He's just going to live with the problem until school's out this spring, and then send it in for repair right before the warranty runs out.  By then, the weather will be warm enough that he can entertain himself outdoors and won't miss the tablet quite so much.

How do you like your Nexus 7?  Have you run across any problems with it?  Do you know of a source for replacement speakers?  Please share them in the comments below.
Posted by Obi-Wan at 8:00 PM