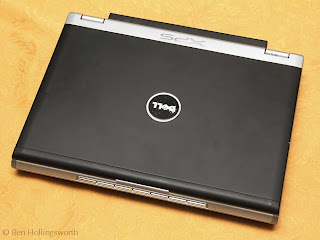 I've got an old, 12" Dell laptop that I like to use when portability is my primary computing concern.  It's gotten pretty old, though, and the battery life pretty much sucked, providing less than an hour of use on a full charge.  I went looking for a replacement battery, and found that I could also triple the amount of RAM for only a few dollars more.  Together, these improvements should extend the life of this reliable little machine.

I bought my XPS M1210 used in 2008 when it was about a year old.  Shortly after I got it home, I realized that the original factory battery was nearly shot.  It wouldn't hold a charge for more than an hour.  I immediately bought a third party replacement online for $80, and it served me well for several years of rarely being powered down (just suspended).  Initially, I got 4-5 hours of run time from a full charge.

Most rechargeable batteries prefer to be fully drained and then fully charged.  Keeping them constantly on a charger--or even topping off the charge when it's not very low--reduces the life expectancy of the battery.  Alas, waiting for the battery to drain down before charging it isn't very convenient.  If you want to use the laptop away from an outlet for any length of time, you need the battery to be fully charged when you start.  Like most people, I decided that the added convenience was worth the expense of having to buy a new battery every few years, so I leave the battery plugged into the charger whenever I'm not using it.

The charge life of that first replacement battery slowly declined over four years until I finally got tired of getting less than an hour's use from simple web browsing.  In 2012, I ordered another replacement through Amazon.  Be careful when shopping for batteries; some are better than others.  Many of those offered got lousy reviews.  I did find one 9-cell unit being sold on Amazon by EPC(USA) that got good reviews and cost only about $25 -- less than a third of what I paid for the first one. 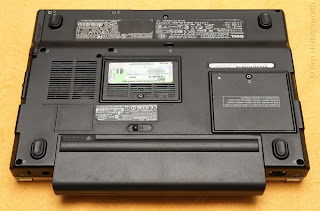 The package got beat up by the USPS in transit, but the battery remained functional.  One bent plastic prong was able to be bent back into shape easily enough.

When I plugged it in straight out of the box, my battery widget showed it at 65% full and estimated 3 hrs, 48 minutes of usage remaining.  A full charge improves that even further.  My old battery used to show about 25% full when I first took it off the charger, and would last less than an hour if I used it lightly.  That improvement will make this little notebook far more usable.  Well worth the $25 it cost me.  This time, I think I'll be a little more careful about only charging the battery when it gets low.

While I was battery shopping, I ran across new RAM (PC2-5300) for the M1210.  The more of your filesystem that can be cached in RAM, the less your hard drive must be accessed.  Older, spinning hard drives (as opposed to SSD's) use a lot more current when being accessed than they do when sitting idle.  The more RAM you have, the longer your battery will last.

My laptop came with only 1GB, but will support up to 4GB in its two slots.  I bought an additional 2GB stick of RAM for another $25, again from Amazon.  It arrived in just two days later via USPS. 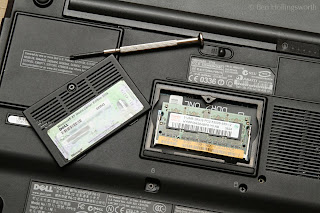 This web page describes how to access the two memory slots in this laptop.  Not only are they not together, they're accessed from opposite sides of the computer.  The rear slot is covered by a door on the bottom of the computer, and is secured by a single screw.  The other slot is hidden under the keyboard, and while it involves removing more than a single screw, it's still not terribly difficult to access.

I had bindly assumed that this 2GB stick would triple the RAM in my computer.  Alas, when I opened up the rear battery cover, I found that my notebook contained two 512MB sticks rather than a single 1GB stick.  Adding the new stick meant removing one of the old sticks, so I only gained 1.5GB in the process.  Oh well.  Jumping from 1GB to 2.5GB is still worth $25 to me.

Upon booting up with the new RAM, top(1) indicated that my computer (running the Fedora 16 version of Linux) soon used the entire 2.5GB as part of the filesystem cache.  After a week of use, I still haven't seen it use any swap space.

All in all, I'm happy with the new upgrades.  They'll prolong the useful life of my little laptop--probably until the LCD grows too dim to use it in bright environments (it's already headed down that path).  I think it was $50 well spent.

What computer upgrades have given you the most bang for the buck?  Please share your experiences in the comments below!
Posted by Obi-Wan at 8:00 PM