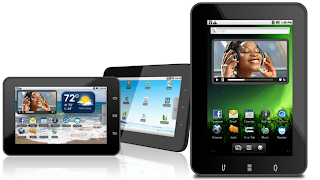 All the cool kids are buying tablets these days.  Not the kind of tablets that I had as a kid, of course, which required a pencil to scribble on.  I went through scores of those growing up, but was never "cool."  Anyway, after a friend upgraded to a new Google Nexus 7 tablet, he offered to sell me his "craptastic" (his word) Velocity Micro Cruz T103 7" tablet for a song.  I borrowed it for an evening and put it through its paces to see how well it worked.  I had pretty low requirements for a tablet, but this tablet failed to clear even that bar.

I don't play games on my mobile devices, but my kids do.  My 12-year-old son just bought himself a new Nexus 7, and we all liked that 7" form factor, so I thought it might be nice to have another device available for the younger kids to play on and for us adults to use as an e-reader and video player.  As a semi-pro photographer, I also wanted something larger than my phone on which to show off photos.

The T100-series tablets are not all that old, but they've always been targeted at the bottom end of the market share.  They sell new on Amazon for under $100.  (I'll break from tradition and not link to it, because I can't in good conscience recommend that anybody buy one.)  My friend bought his for just $50 from Woot!, and after a few months was willing to sell it to me for a fraction of that.  This tablet needed only to provide me more value than two fast food meals in order to find a new home, but no dice.

The first thing you notice when picking it up is that it's considerably heavier and nearly 50% thicker than a Nexus 7.  The screen size is about the same.  User storage sits on a full-size SD card that lives in an external slot (not hidden inside the back cover, as on most mobile devices).  Fortunately, the card is completely recessed when inserted, so there's no chance of catching it on anything.  AC charging is done via a traditional, round plug for a wall wart, but it will also charge over USB when plugged in via the mini-USB (not micro-USB, like most devices) port.  Battery life seems to be good, since using it all evening burned off only about half the battery.

When powered up, the touch screen is finicky.  Sometimes it works fine, but other times it simply doesn't register your touch.  I had more trouble with tapping than with swiping, and sometimes had to resort to a very short swipe in order to make a button press register.  This pretty much ruled out its use for any quick-response video games like Fruit Ninja.  It's annoying, but not intolerable.  You do have to pay more attention when typing, though, as dropping letters is a common problem.

The T103 runs Android 2.2.1.  There are people working on creating a custom ROM for it that would run something newer (probably 2.3 or 4.0), but that's not available in a stable release yet.  Check these links for info on the Clockwork Recovery Mod and the new ROM itself.  Other useful info on removing bloatware can be found here.

The biggest problem is that the T103 uses MIPS processor rather than the more common ARM processor found in most mobile devices.  Many app makers will release their app with a shared library compiled specifically for the ARM device, and these apps will not work on the T103.  Unfortunately, the list of apps falling under this heading is longer than I'd initially hoped it would be.  From my own experience in one evening of experimentation, they include:

Of course, some of these games would be unplayable anyway thanks to the unresponsive touch screen.  In fact, not a single game that my kids typically play was available on this device.  However, being locked out of most of the social media sites that I frequent was a major downer for me.  My kids frequent the videos & games on LEGO.com, but it requires a newer version of Flash than is available.

What does work, from my own experience?

I ripped low-res copies of a few of my favorite movies, and the tablet actually played them quite well.  It had a little trouble keeping up with higher-res movies.  In either case, the volume was lower than I'd like, so you need headphones or a quiet room in order to listen.  Ripping subtitles along with the movie helped.

The stock music player worked quite well on recorded MP3's, as did the Pandora app for streamed music. The same volume concerns mentioned above still apply.

The Kindle app worked well for a few ebooks that I checked out from my local library.  However, unlike the newer version of the app on my phone, I couldn't figure out how to use this older Kindle app to read PDF's stored on the phone.  Simply placing them in the 'kindle' directory on the sdcard didn't work.  Reading those PDF's with the OfficeSuite app works, but interface really isn't tailored to ebooks.

Compared with my phone's 4.3" screen, I do really like the larger size of this 7" tablet for things like viewing photos and maps and reading PDF's.  YouTube videos are nice at that size, too.  Web browsing actually feels usable again -- something I've never felt when using the postage-stamp-sized screen on my phone.

I was really hoping to be able to use it for browsing house plans (with AutoCAD WS) and viewing photos via the Flickr & Google+ apps, so those are quite disappointing to lose.  LEGO.com is a tough one for the kids to lose, too.

The final blow for this tablet came when I mounted its sdcard via USB storage on my computer for the better part of an hour while I tried to copy down several gigabytes worth of ripped movies.  The copy seemed to work fine, and my computer never lost contact with the USB drive.  However, when I unmounted the drive from the computer and turned off USB storage on the tablet, the SD card disappeared, and I got a notification stating that it was safe to remove the SD card.  Inserting the SD card into my several different computers indicated that the filesystem had been clobbered, and the only recourse was to reformat the card.  This happened twice in a row while trying to copy movies, but not when briefly copying small amounts of data.

For the few dollars that this tablet would have cost me, I was willing to live with the lack of good apps and just use it for reading ebooks, watching movies, and showing off photos.  However, I simply can't live with it clobbering the sdcard filesystem repeatedly.  Thus endeth my experience with the Velocity Micro Cruz T103.

If any of you have had a different experience with this or some other low end tablet, I'm all ears.  Workarounds for the problems I experienced would also be interesting to hear.  Please speak up in the comments below.
Posted by Obi-Wan at 8:00 PM