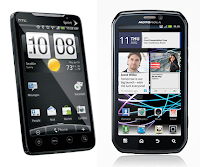 So... this is what the 21st century looks like.

My wife and I just upgraded to our first smart phones last week.  Stacy got an HTC EVO 4G, which is over 18 months old, but very highly regarded.  I got a Motorola Photon 4G, which is only 3 months old.  We're both glued to them these days, spending an insane amount of time figuring out which features will make us more productive and which are just time sinks.

First, a little background.  I'm a techie.  A died-in-the-wool engineer.  I love to tinker.  I run at least a half dozen different operating systems on the dozen or so computers in our house (most of them Linux variants).  I roll my own web servers and firewall.  I've spent the last 22+ years programming and doing system administration for a living.  This same tendency flows into vehicle and home repair, too, but I'll avoid that rabbit trail for now.

So, when it came time to get a smart phone, I wasn't content to just blindly take whatever model was set in front of me.  A fair bit of research told me that no phone would be perfect for me, but I decided that the Photon (which was suggested by the source providing the phones) was probably as close as any.  Both my Photon and Stacy's EVO came slightly used and therefore at great prices.

As I'm only a week into the smartphone experience, this is by no means a comprehensive review, but I wanted to voice some opinions I've gleaned and some roadblocks we've hit so far.  They're in no particular order.

Since I'm a semi-pro photographer, we'll start with the cameras.  I have to keep reminding myself that these are cell phones, not DSLR's.  Even the best phone camera (which presently resides inside the iPhone 4S) will look like crap compared to my Canon 7D.  I actually don't have to remind myself of that very often, because the phone does that job for me.  The Photon's camera is purported to be a mid-range camera among its pears.  I find its pictures to be insanely noisy.  Color balance is screwy.  Dimly lit environments produce very dark photos, as if the shutter speed is capped at 1/30s or something and can go no slower.  The dual-LED flash is nearly useless.  Despite all this, the Photon's camera is still sharper than the EVO's, and both are night & day better than my old Samsung Convoy.  We noticed that the plastic lens cover on the EVO is actually cracked -- a common problem, I read -- but it doesn't seem to affect the picture quality noticeably.

The Photon's camera shutter noise is also unbelievably loud.  Everybody complains about it.  There are a few apps that will quiet it down, and I'm trying to find the best one based on all the other features that they offer.  Pointers would be appreciated.  I definitely expect to become a power user for this camera.

For anybody that does much touch typing on a real keyboard, downloading the Hacker's Keyboard app is a must.  In landscape mode, it gives you a full, 5-row keyboard, complete with Esc, Alt, & Ctrl keys.  Punctuation is where you'd expect it.  It's a godsend when using an SSH client with a command prompt.

The Google Plus app sucks.  It's missing critical functionality (like editing a post), and yesterday's latest update traded some features for others rather than simply adding new stuff.

For some time, I was worried that the larger size of the smartphone (the Photon has a 4.3" display) would prevent me from carrying it in my front jeans pocket.  As it turns out,  the thinner depth makes it easier to slide in & out than my old clamshell phone.  That's a pleasant surprise.  Things attached to my belt tend to take a beating, so I didn't want to resort to a belt clip.  Stacy did have to buy a new purse because the cell phone pocket on her old one was too small to hold her EVO.

I'm quite thankful to finally have a full-sized 3.5mm headphone jack.  The 2.5mm jack on my last phone was useless.  I'm getting caught up on my podcasts these days.  Speaking of headphone jacks, does anybody know of a source for rubber plugs to keep pocket lint from collecting in there?  When I got my Photon, I had to use a needle to dig out a large wad of it (from the previous owner) that was preventing my headphone plug from making electrical contact.  And speaking of headphones, I absolutely love my Sennheiser CX-200 ear buds.

The Photon's numeric touch pad for entering my screen lock PIN is incredibly finicky.  When you mistype your PIN five times in a row, you get locked out for 30 seconds.  AMHIK.

I'm rather surprised at just how much difference there is in stock user interfaces between two phones running the same version of Android.  The manufacturers really do a lot of customization to these things.  The EVO and the Photon both have features that I like better than the other, so I won't go so far as to say which I like better just yet.

Hallelujah!  At long last, Stacy and I both have phones that use the same style of charger & data jack.  No more his & hers cables filling our drawers.  What took micro-USB so long to catch on?

Although we haven't used them yet, certain apps will definitely be time savers for us.  For instance, the RedBox app that lets us check availability of a movie at every box en route between school & home.  The GPS & mapping will be handy, too.  Double checking the address of a calendar appt once I reach the neighborhood has already saved my bacon once.  The ability to record notes (typed or audio) whenever I happen to think of things will save me constant frustration.  The YouVersion Bible app means one less object to carry to church.  That's just a few that come to mind.

On a more frustrating note, despite working at a software development company, both the WiFi and 3G coverage at my top-floor desk is almost non existent.  Grrr...

I would be remiss to not express my gratitude to Mark & Chris Mason of Cross Pointe Innovations for their help in getting us squared away with these new phones.  Be sure to contact CPI for all of your corporate cell phone needs.

As always, if you have any questions, comments, or other remarks, please speak up in the comments section below.  We'd love to hear from you!